This is an interesting little reserve, I visited it at about this time  last year in order to photograph Butcher’s Broom, which flowers from late January through to March. The flowers are tiny and  my photos were OK but not stunning. So I made a return visit this year. Unfortunately it was quite windy and this is the bane of wildflower photographers. So I took loads of photos and hoped that a few would be at a time when the wind had dropped and the flowers were not rattling around. It only takes the slightest movement to achieve a fuzzy photo.

I did get a few that were better than last years but still not stunning. Perhaps given the size of the flower stunning is not going to be an option.

This little reserve is probably only about an acre, it is the remnants of a former stately home and extensive gardens. It is on Curtis Hayward Drive Way which is the name of the former owners of the estate.

There was an information board last year, but this year it is gone, the two posts that supported it are all that remain.  The house and gardens were developed into a housing estate , but someone thought to preserve a small portion as a recreational area for the local residents. On both my visits I have seen several people using it, mainly dog walkers but also Mum’s with toddlers. It is quite muddy in January but even at this time it does have some Snowdrops and Winter Aconites in flower. Later in the year there will be a lot more, and no doubt less mud.  There is a pond which is OK, some bits of wood floating but thankfully no shopping trolleys, although there was one dumped near an entrance. Near to the Butchers Broom bushes there are some large holes in the ground, possibly badgers but they did not look as if they are currently in use. 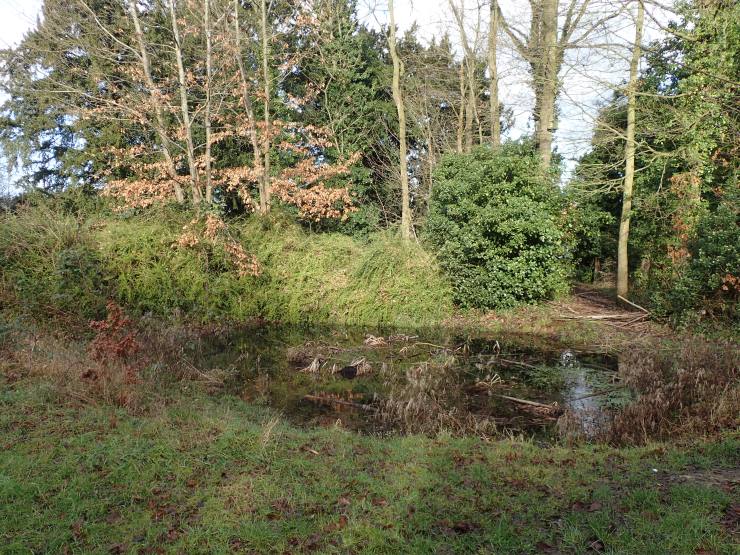 There are also a couple of patches of Winter Heliotrope, I noticed these when I visited last year but this year they looked considerably bigger. They do spread at quite a rate and then they out compete all other plants. It would be a good idea if the people who look after this reserve were to remove this alien species as soon as possible, because otherwise in ten years time it will almost certainly be the only wild flower growing there. Some people like this plant it does have purple flowers at this time of year which smell strongly and of Heliotrope but I think it is most unwelcome.

Apart from the Snowdrops and Winter Aconites there was also evidence of  Lesser Celandine, Wild Arum, Periwinkle, Cow Parsley, Stinking Iris and lots of bulbs coming up, probably  Bluebells and various Daffodils. Of course being part of a former garden it also has some fairly impressive trees.

So not stunning but a good addition to the local area.