This page about the evolution of plants looks at the group known as the Pteridophytes which is largely the Ferns but also includes the Horsetails, Selaginellas and Club mosses.

First of all lets look at the ferns, these also show ‘alternation of generation’ however it is now the reverse of the situation that exists in the Bryophytes. The dominant generation is the diploid sporophyte, which is the fern plant as we know it. This is the fern growing out of your wall, or the various types on sale at your local garden centre and even the giant tree ferns from New Zealand which are  also sometimes available, at a price, from the garden centers. The gametophyte generation is small, you may well have never seen or noticed one. It is a little flat circle of green which grows in damp places, it may get to be as large as 1cm across! and it will give rise to a fern in due course.

On to the sexual details, the fern as we have said is the sporophyte, it is diploid and as its name suggests it produces spores. You may well have noticed brown rusty marks on the undersides of some fern leaves, this is where spores are being produced. If you were to examine these brown areas with a lens or a binocular microscope, then you would discover that they are quite complex, indeed beautiful and are in fact a concentration of spore capsules, somewhat like the capsules produced by mosses and in exactly the same way that mosses produce spores so do the capsules of ferns. The chromosomes are split in a process called meiosis and haploid spores are produced. These spores are then dispersed partly with a little help from the capsules which have a clever catapult mechanism, but also largely but wind.

Now the story becomes very similar to the mosses and liverworts, in fact almost identical to the liverworts. If the spores land somewhere damp and suitable it grows into the gametophyte which looks like a little liverwort, it is as I said about 1 cm across and is perhaps more heart shaped than circular. It is green and does photosynthesise, so it is self supporting. It has little hair like ‘roots’ called rhizoids so it can take up water and minerals, although it can directly absorb them into all its cells. On its underside it develops archegonia, the flask shaped female receptacles in which a single cell  or egg called an oocyte develops. It also develops male organs called antheridia and these produce several male gametes called antherozoids which have tails (flagella) and can swim, they are somewhat like sperm cells. These antherozoids have to swim to the archegonium and thus to the oocyte, in order for this to happen they need water and so fertilisation is dependent on some water being present for a period of time, thus ferns have to grow where surface water is at least present for a few days at some point in the year.  Once fertilised the oocyte is now called an oosphere and is of course diploid. This cell now develops into a new fern, initially it will be dependent on the gametopyte but very quickly it develops roots and little leaves unfurl and it quickly becomes self sufficient and grows into a fern as we know it.

So again we have ‘alternation of generation’  Sporophyte (the main fern plant) produces spores, produces a gametophyte (small heart shaped unit similar to a liverwort), produces gametes (oocytes and antherozoids), these combine in  fertilisation and thus produce an oosphere which grows into a fern. And so it goes on. You can see both generations in the photo above, the flat sheets of cells, darker green, are the gametophytes and then the little trifoliate leaf with a short stalk is the first leaf of what will become a large fern, the sporophyte generation.

The big difference here is that the sporophyte is now really very dominant, it can live for many years ( hundreds in the case of Tree Ferns). It is quite difficult to see the jump from the little spore capsule of a moss to the big independent plant. As is often the case with evolution it was almost certainly not a linear progression. Ferns and mosses both probably had a common ancestor which became extinct many years ago.

Moving on we now have the transition from ferns to conifers. There are good intermediate living examples which make the evolution quite plausible, however it is somewhat tedious to go into all the details so here is a brief outline of the links.

Horsetails; here the big steps forward are that the spores are now produced in a specialised unit at the apex of the plant, not just in a brown patch on the underside of a normal foliage leaf. This unit looks quite like a cone. In fact this trend to producing the spore in a dedicated area is already evolving in the ferns. Some ferns like the royal fern and the adders tongue fern have specialised fronds differing from the normal vegetative fronds.

Next in the sequence come little plants called Selaginella and Club Mosses. (Please be aware that whilst the name is Club Moss, they are quite different to Mosses and the name just reflects a superficial resemblance to the mosses).  Their contribution to this evolutionary path is that the spores are now produced in two different sporangia. which look different, the male sporangia are called microsporangia and this is the start towards the evolution of anthers. The female sporangia are called megasporangia.

Also the spores look different, the male spores are small…..microscopic, they are called microspores. When they germinate they do not grow into an independent plant (gametophyte) looking like a liverwort. They just produce antherozoids, all this happens inside the original spore case, so no photosynthesis, no rhizoids,  it is all microscopic and simply produces the antherozoids which still resemble sperm and have tails (flagella) and when released have to swim to the female cell to effect fertilisation.

The photo below shows a Selaginella species probably Selaginella denticulata with little brown spore capsules, they are microsporangia,  and the megasporangisa are normally larger and found lower down on the stem, there may be some visible but I am not 100% sure.

Actually if you look at this cropped region from the photo above you can see there are both micro and mega sporangia, the microsporangia are brown and the megasporangia are green. 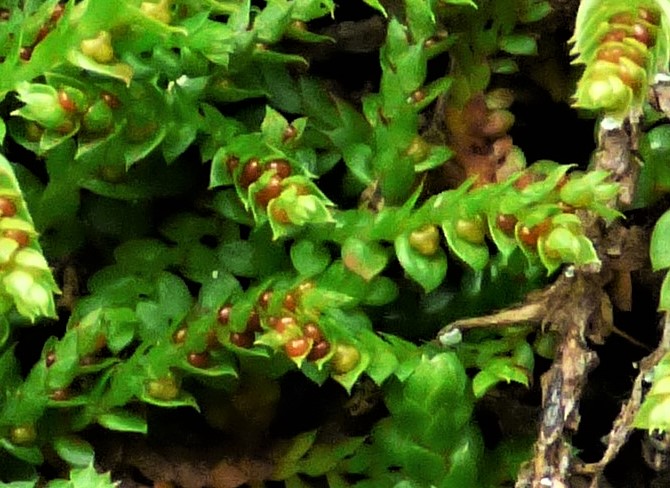 The female spores are called…you guessed it megaspores and these are bigger and when they germinate they do develop a little bit. Some cells are green and can photosynthesise, also they do produce a few smalls rhizoids, but it is all quite small scale and the bulk of the cells are still contained within the ruptured spore case. You would be hard put to see it with the naked eye. The key stage is the production of an archegonium containing the oocyte. This awaits the arrival of the antherozoid still swimming in a film of water so that it can be fertilised and become a diploid oosphere which will then develop into the next Selaginella plant or club Moss plant.

So we are still locked in to a process which is quite random and relies on a layer of water between the male gametophyte and the female gametophyte. The next step forward involves breaking this dependence on water and the antherozoids having to swim to effect ferilisation, but that is in part 4 and features another group of plants called Cycads.