Wood Cranesbill is not found in the southern half of the UK. If you draw a line across from Manchester to Middlesborough then below that it is a rarity. Thus I had not come across it in my southern existence. I saw some photographs of it posted on the internet by a botanist called Johnathan who lives in Yorkshire.  He had seen them in Swaledale on a road that passes through a village called Muker,  which is as I discovered pronounced like the pin mould fungus that grows on old bread called Mucor, and not as I thought Mucker as in ‘my old mucker’. 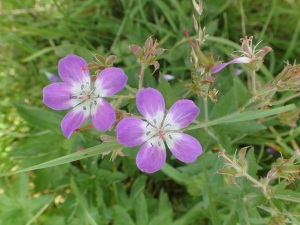 Now as it happened I found myself in Scotland for a few days as a birthday treat.  So I kept my eye out for interesting wild flowers, as I do, and particularly Wood Cranesbill. Despite its name it is found in a variety of habitats, woodland being one of them but also hay meadows, roadside banks and rocky ledges in the mountains.  I did go for a walk in the Trossachs,  but it was not exactly mountain ledges! During my stay in Scotland I did not see any Wood cranesbill, despite the fact that it was at the end of June which is the right time for this particular Cranesbill to flower.

So we decided to take the scenic route back from Glasgow to Gloucestershire and include Muker on the route, It added about 50 miles to the journey. In fact the little road from Kirkby Stephen, the B6270 is an absolute delight and to further add to its charms it has Wood Cranesbil growing at the side of the road. 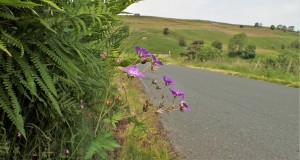 I was lucky because the local authorities had in their infinite wisdom cut back a lot of the roadside vegetation so that the Wood Cransebill  plants that had earlier been photographed by Jonathan were no longer there.  Well they would still have been there, sort of,  in that the plant is a perennial so its roots would still be in the ground and the bottom half of the plant would be there but no flowers. It would probably survive to grow up again next year. Luckily or maybe on purpose the authorities had not cut all the vegetation and some Wood Cranesbills were still there in their entirety and I took my photos.

As I said this was a delightful stretch of road and apart from the scenery I also saw Meadow Cranesbill, Sweet Cicely and a very delicate Fern, but I am not sure which one it was, all I do know is that it is not one that I usually see.