There are quite a lot of species of Doronicum or Leopardsbane. None of them are native to the UK most come from central and Eastern Asia.   As with many garden plants they have escaped into the wild and established themselves. They are all yellow daisy like plants and some will flower relatively early so are quite popular with gardeners, also they are fairly easy to grow and will tolerate shady places and are also OK in more sunny locations. 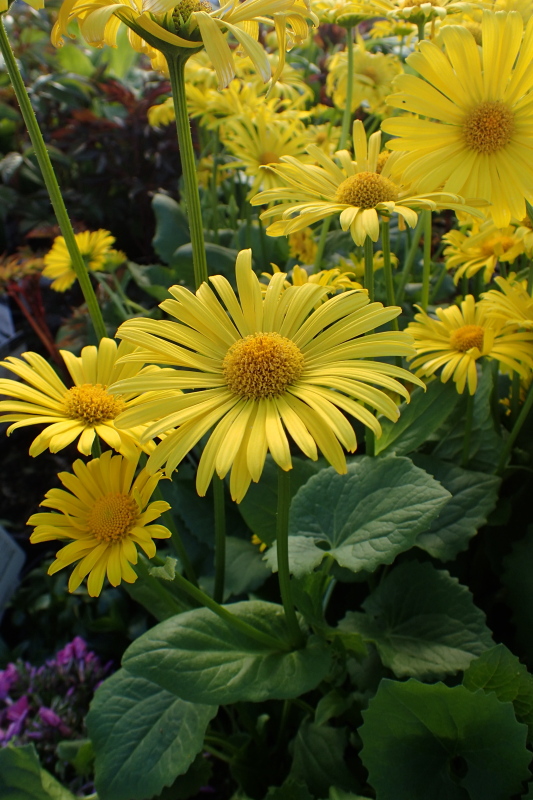 I have never seen them in the wild. Their distribution is not uniform, they are more likely to be found in the eastern regions of Scotland and along  the Welsh/English border. They  are supposed to grow close to where I now live in areas known as  Coppet Hill and Park Wood (close to the river Wye near Symond’s Yatt). I have been to that region hunting about for them with no luck. They are perennials so if they were recorded as being present in 2014 then there is a good chance that they will still be there in 2018 as long as the council has not been too enthusiastic with their cutting and spraying. Also they should be easy enough to spot when flowering which is May to July, with their bold yellow flowers. They grow up quite tall 30 to 45 cm high. and normally are hedgerow species.

In the book Wild flowers of Britain and Ireland  by Fitter, Fitter and Blamey they cover 3 species, Doronicum pardalianches, which is the most common form, then they mention D. plantagineum which has the common name of Plantain-leaved Leopardsbane and has longer thinner leaves, somewhat resembling  Plantain and finally Eastern Leopardsbane  D.columnae which has heart shaped leaves. .

Now I have to admit that my photos were taken at a local garden centre ……. my thinking was cut out the middle man, ie the garden.  On the label you can see it says ‘Doronicum Leonardo compact’…. I looked this up and it would seem several garden centers supply this and it is a species called Doronicum orientale. I suspect that this species is also growing wild in some parts of the countryside. It does seem to be the main ‘wild’ species in Finland.

Finally I was wondering about the common name.  ‘Bane’ means banish and we have plants like Fleabane which was incorporated into straw bedding years ago as it was thought to deter Fleas. There is also a plant called Dogsbane and yes that is thought to deter dogs. Henbane is not thought to have anything to do with chickens and is more likely to be one of these names where pronunciations have changed over the years and it may be that hen has something to do with death.  Now we get on to some more robust names like Wolfsbane and of course Leopardsbane.  Wolfsbane is in the Aconitum family and is deadly poisonous. Extracts of it were used to add to bait in the past to get rid of wolves and other predatory animals which might cause problems to sheep flocks. There was even a report in the Independent Newspaper of Friday 7 November 2014 claiming that a Gardener dies ‘after brushing against deadly Wolfsbane flower’ on millionaire’s estate.

So on to Leopardsbane…. well my researches have only produced the notion that this plant is poisonous and thus it was called Leopardsbane…… well that’s not very convincing. I also came across a website about Tortoise care and it was warning about planting Leopardsbane in a garden where you keep a tortoise because they will eat the leaves and that can cause problems and death.    It is a long way from a tortoise to a Leopard though!!!

Recently (May 2020 Corona virus times) I was contacted by a lady asking about some Leopardsbane plants which she had seen on the banks of the River Severn and kindly offering to send me some photos with permission to use them on this site. And it is a very good photo and certainly a specimen growing in the wild.

With many thanks to Ruth Hyslop.