I have recently searched high and low for a Stinking Hellebore, I can recall having seen them at various times in the past and not really taking that much notice of them. Probably because they flower in January and so in most months they would just be a low bushy perennial plant and not that impressive. However when you want some photos of one for this Woodland wildflower blog, then finding one can become almost obsessive.

I have visited several woods where they are supposed to grow with no success. It would seem that they are relatively rare, given the way  they are refereed to along with other sought after wild flowers.   ‘Limekiln Woods; 2.6 Hectares , an ancient woodland site managed by the Limekiln Naturalist Trust, predominantly Beech with an under story of Holly and some Laurel Spurge. This site is home to Bird’s Nest Orchid, Ivy Broomrape, Stinking Hellebore and Ghost Orchid….last seen in 1897.’    No I made that up, but that is the sort of thing I am talking about.

So I have been scurrying about the woods of Gloucestershire and Monmouthshire looking for the Stinking Hellebore. 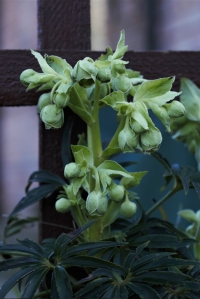 Opposite to where I live are some nice Oak trees, growing on a steep bank and at times when you get the magic light (heavy dark cloud but also with sunshine) they can look quite stunning. So today I decided to have a nose around and try to see if any good angles were possible so that next time there was some magic light I would be able to leg it up the hill to my pre determined spot and snap away.

Four houses down from where I live I noticed they had some  hellebores in their garden, the wishy washy pink and purple ones that some people like and are on sale in most garden centres at this time of year. Then I saw they also had two wild type, Stinking Hellebores.   Growing in a garden I know, but when you are desperate who cares so I gratefully  photographed them and went on my way.

As I entered the area of the steep bank with the Oak trees I came across another one, it was a bit straggly and growing in a fence but this was not a garden and in a more ‘wild’ situation. I took loads more photos, It was a bit awkward as it was quite steep and muddy and there was a lot of horse poo about.

I continued on my way and found two more growing in among some brambles, then another and another and as I progressed I found loads, there were several patches where they were the dominant plant. I would estimate that there are between 150 and 250 individual plants growing in an area of about one acre and all about 300 yards from my house.

Here is a slide show of some of the photos I took, the first ones are from the garden and the rest are of various plants up on the slope along with a few shots back at the village and looking towards my house.

So I have found my Stinking Hellebore and I can now move my obsessive quest onto another wild flower…. Could be Yellow Star of Bethlehem or maybe Wild Tulip.

As you can see from the photos, the leaves are palmate and quite a dark colour sometimes becoming purple. The plant is as I said a perennial and retains its leaves throughout the winter . The new leaves start to develop early, you can see that already some of the plants have tufts of new smaller leaves. The stems sometimes have purple blotches on them.

The flowers are a light green/yellow colour and sometimes the petals are edged with purple. In fact they are sepals but they look like petals. Also the flower shoots have bracts which are the same colour as the sepals, the combination of flowers and bracts are quite bright, and attract your attention, especially at this time of year when few other plants have bright green foliage. If they flowered in April or May they would be far less noticeable. Presumably the bees and other insect pollinators also find it easy to spot them at this time of year.

After the flowers are over large seed pods develop, they look a bit like pea pods but there are three fused together. The plants largely  propagate by the dispersal of their seeds. Evidently individual plants only live for a few years four or five, so they are short lived perennials, if that makes sense.  They are called stinking but they are not really smelly. They only smell if you crush the leaves, which is the case for many plants and they are not called stinking. It is however poisonous, in days gone by it was used to rid people of worms, however the amount administered is quite critical as too much would kill not only the worms but also their owner!

I think the population I have found is a native population and not escaped garden plants, partly because it is so large and also because it is growing in the proper habitat, steep, limestone and somewhat craggy with scattered trees so partial shade….. This is the distribution map from the BSBI web site showing it is southerly plant,reasonably rare and predominantly in Gloucestershire/Herefordshire.