The Greater Periwinkle, Vinca major,  is quite a familiar garden plant, it is also now recognised as a wild flower, all be it as an introduced species. The photo below is of a plant growing ‘in the wild’ close to the village of St Briavels in Gloucestershire and it was flowering in mid December.

It will flower in most months but it is most prolific in the Spring. It will happily grow in quite shady places and in quite damp places. In the ‘wild’ it is often found close to habitation, along roadsides and in places where people have dumped garden refuse. It is quick to colonise and  a few stems of it mixed in with other garden waste will soon establish itself. The plant is perennial, so once established it is more or less there for good. It does produce seed and can spread in that way as well.

According to the Online atlas of British and Irish flora  ‘V. major was being cultivated in Britain by 1597.  It was recorded from the wild by 1650 (Middlesex). It has increased since the 1962 Atlas, probably mostly due to continued dumping of garden material, although it is also likely to be better recorded.  There are two subspecies and subsp. major, is a native of the European Mediterranean region; and subsp. hirsuta is native to N. Turkey and the Caucasus.’

As you can see from their distribution map it is quite well established in England not doing so well in Scotland and Wales. Possibly as it is a native of more southern climes its distribution in the British Isles is temperature controlled.

There is also another Periwinkle called Lesser Periwinkle, which has smaller flowers than this species. However bigger and smaller are not that useful a criteria when you do not have them next to one another for comparisons. The flowers of greater Periwinkle are normally about 35 mm across whereas lesser is about 25 to 30 mm across but there will be some overlap. So you need to put your glasses on or get your magnifying glass out and look very carefully at the edge of the leaves and the sepals which in the case of Greater Periwinkle will have little white hairs on them. You can see them in the photo below which is of a flower in bud. 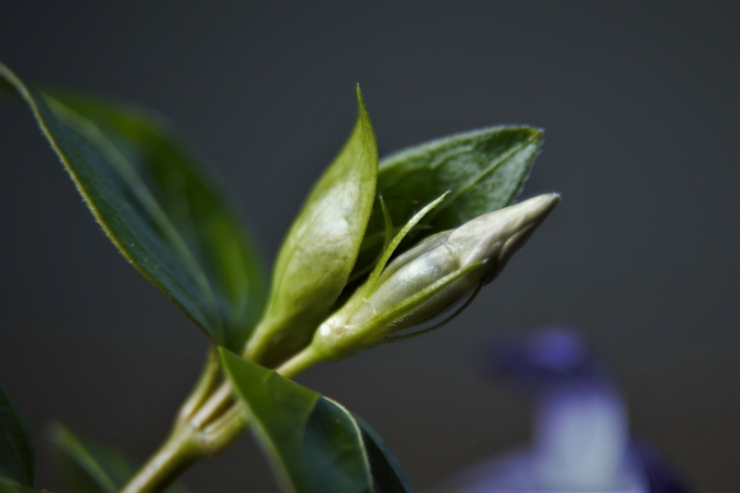 I think that Lesser Periwinkle looks a more sky blue colour were as Greater Periwinkle has a more purple blue colour. However as there are many garden varieties, I expect the colour will vary quite a lot.

As with many flowers you can even get a white variety and this is sold by some nurseries. I have personally never seen a periwinkle with white flowers so this photo is one I have ‘borrowed’ It is on a web site by Plants4less where you can purchase the white variety called Alba should you wish. There are also many nurseries offering the normal coloured flowers for sale. Gardeners quite like this plant as it is not very fussy and will grow in quite shady places and tolerate poor soil. The shinny leaves are quite attractive and it will flower in most months of the year with a peak in Spring time.

Some claim that the plant is poisonous and I have also seen claims that it is not poisonous, however I would advise against trying it. Also as with many species there are various references to it healing properties. One I like is that it can heal the relationship between a man and his wife. In the 16th century book entitled ‘the boke of secretes of Albertus Magnus of the vertues of Herbes, Stones and certaine beastes’, it talks of the power of periwinkle to produce love between a man and his wife. It must be powdered and mixed with leeks and earthworms and then added to the couple’s meals.

By the 17th century Nicholas Culpeper simply says ‘that the leaves eaten by man and wife together, cause love between them.’ No reference to leeks and earthworms!

The Apuleius Platonicus also imbues periwinkle with some remarkable powers. It is the first plant to choose to combat sickness brought on by the Devil, protect against snakes and other wild beasts as well as being an antidote to many poisons. If you carry it with you, you will be prosperous and well received by strangers.

In France the plant was called ‘Toute-saine’ meaning  (all heal).   However there is also a plant called Tutsan which is a Hypericum and the derivation of its name is also Toute saine.

The Latin name – Vinca – comes from Vincereto bind or fetter.

Here are a few more photos of this plant.