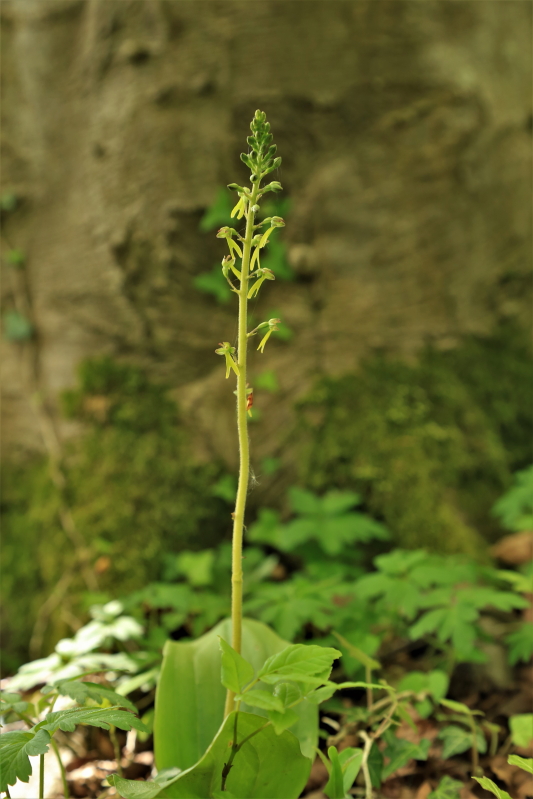 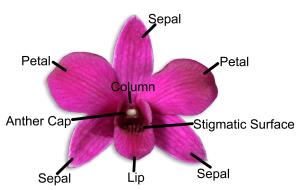 However it is an orchid and as such has the typical orchid flower structure…. which is three sepals and three petals. As you can see in the photo to the right which I found somewhere on google the sepals are fairly straight forward, one sticks up and two are diagonally down to the right and the left. The petals are arranged with two being like normal petals one up and to the right and the other up and to the left. This leaves the third petal which is central and is modified into a sort of tube, labelled in this photo as the column and lip. It is in this part  that the male and female reproductive bits are located… all a little bit erotic really ???

Now lets look at Twaybalde in close up. 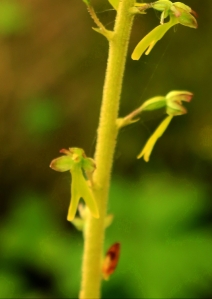 I think the flowers look like the little Morph figures from children’s TV.   It is sometimes referred to as the green man orchid because of these looks. However they still have the basic orchid pattern. The legs and body are the lip which along with the column forms one of the petals. The two fat arms are the two sepals, then the petals to either side are very small and narrow, some what red to the tips. The central part that looks like the head is the column which is where the male and female bits are located. and then above that is the third petal, like a little cap.  So its all there, an orchid but tiny and green.

Twayblade is the commonest orchid in Britain and is found in a variety of habitats from grassland through to woodland. Although even the population of this orchid has declined in recent years due to ancient meadows being ‘improved’ or removed.

It has two big round leaves which are arranged opposite each other. This gives it the name Twayblade. It flowers from mid May through to June. Those in my photos were growing in some Beech woods near Staunton, Gloucestershire, close to the Wye valley.

Sometimes it is called Neottia ovata, and sometimes Listera ovata, I do not know which is the most up to date name, they change them all the time.

The flower is pollinated by a wide range of insects. It is above all pollinated by parasitic wasps, sawflies and beetles. The pollinia (modified anthers….the male bit) lie free on top of the gutter-shaped rostellum at the centre of the flower. This organ  is filled with viscid fluid. When an insect touches the sensitive tip of the rostellum, the viscid fluid is ejected and glues the pollinia to the visitor’s body.  When the insect visits another flower the pollinia touch the stigma and pollination is effected, in the case of Twayblade this is a fairly non specific process and the production of seed is quite high.

Also thanks to ‘orchids by post’ for the basic orchid flower pattern photo. You can visit their page and buy exotic/pretty orchids, or you can walk in the woods and look at but not pick the Twayblades.