Also known by several other names but one which links to anemone is wind flower and the Greek name for wind is anemos. Another name which is not so nice is Smellfox, because the leaves smell a bit like the scent of a fox. You often catch this strong smell when walking through the countryside, it is where a fox has marked its territory and it is not particularly pleasant. 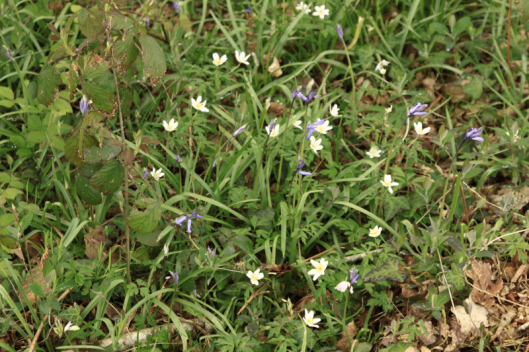 It is in the buttercup family and has a typical ranunnculus type of flower, white though, as opposed to the yellow of the buttercups and cellandines. The flower can sometimes appear a little bit pink’ish.

It flowers very soon after the first leaves make their appearance. The petals are in fact technically called tepals as it does not have separate sepals and petals but just one set of about 7 which double up with the job of protecting the reproductive parts of the flower when in bud (the job of sepals) and looking pretty and attracting pollinators when the flower opens into bloom (the job of the petals) However it hardly seems worthwhile as most of the seeds are sterile and it reproduces asexually with its underground rhizomes creeping outwards and thus extending its coverage slowly, slowly. This is why it is an indicator of ancient woodlands because it is a very slow coloniser, although caution needs to be exercised because it is also a popular garden plant and some gardeners are inclined to chuck garden refuse into a quiet spot in the countryside and thus introduce it into newly wooded areas.

If you have some Wood Anemone growing in your woods as I do, and you wish to help it spread then I see no reason not to dig up a small section of the plant complete with rhizomes and move it a few meters and thus set up some new patches which will establish and spread and look lovely. It would be wrong to dig it up any from a wood which did not belong to you and it would also be wrong to dig it up and introduce it into another woodland.

I have only seen it in a few places in our patch of wood so we will see how it develops now that all the Corsican pines have gone and there is a lot more light available. As I said there were 81 flowers along the bottom edge of the wood, ie next to the road. There are also some growing and flowering along the edge of the wood next to the drive leading up to the bungalows but I have not counted these. Also I have seen several patches of leaves but not in flower, these are quite difficult to spot and are presumably plants which were on their last legs from 55 years of heavy shade, but now will be able to rejuvenate and probably flower next year.  I have not seen any which are in the central region of the wood, this area seems devoid of any ancient woodland species, all the interesting stuff is around the edges where at least a bit of light filtered in.

Like many true woodland plants the leaves do not stay  around very long. Once the trees have their leaves and the woodland floor becomes quite shady they soon turn yellow and die. This photo was taken in May and already the leaves are starting to dye off.

According to folk lore, the Romans believed that the first flower of the season should be plucked as a charm against fever. Until recent times, it was gathered while saying “I gather this against all diseases.” It was then tied around an invalid’s neck. It may be added to rituals of healing or added to a bath. Anemone’s connections to the legend of Adonis’s demise also make it useful in rituals of death, dying, passing.

As a flower of a wind god, anemone may be used to invoke air elementals. Offerings may be made of the flowers, and it may be infused into oil for use in anointing candles. It may also be used as offerings to the small creatures of ‘faery’.

On  Good Friday a couple of years ago my wife and I went for a walk in the woods near Bigsweir, along the Wye valley and we came across a lady picking the anemones, she had them in a glass bowl, she also had another bowl with moss in it  Tut tut picking flowers is somewhat frowned upon these days and for good reason. She said she was going to use them in a decoration to put in her local church. I said to my wife ‘picking wild flowers to be used in the church sort of legitimises it??’……Maybe

You might come across some Blue Anemones (A. apennina) they are very attractive and come in three colours… Blue, and occasionally white or pink. These were growing in a grassy patch in Chepstow.