Green Hellebore, ( Helleborus viridis) this is a fairly rare plant in the wild though many people are familiar with the garden Hellebores one of which is refered to as Christmas Rose.

The garden plants produce flowers of varying colours from yellows through greens and pinks/purples. However they are always quite dull colours, they remind me of Farrow and Ball paints, all very trendy, pastel, chalky, colours. The wild species has pastel green flowers…. It flowers early in the year, February. Actually I have recently seen a blog from someone I know living in France with some quite nice Hellebores, so maybe I have to ameliorate my comments. Here is a link to the blog, ‘A French Garden’.

The photo to the side was taken at the beginning of February and the flower is just opening and the first of the stamens seem to have  swelled up and be almost ready to shed their pollen. 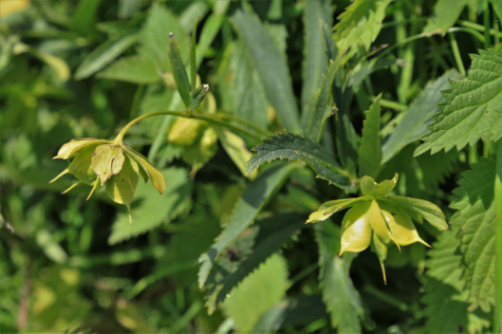 This next photo was taken in May and shows the developing seed pods.
The seeds are exactly the same shape as the individual seeds that make up the seed heads found on buttercups only much larger. This indicates that the plant is in the same family Rannunculacae.

This species has been grown in gardens since Medieval times. These photos were obtained from a small group of this plant growing by the outer wall of the remains of  Lancaut church on the banks of the river Wye. It is quite likely that the plants were planted there in the vicinity of the church several hundred years ago when the church was still fully functioning.

It is a plant of fairly low distribution, it will only grow where the soil is based on lime or is alkaline, so that restricts its range, also it is largely found in the south of the UK, there are very few records from Scotland. The Wye valley up as far as Ross does have several records, many of them are historic. For some reason the plant seems to have declined in recent years.

There is some discussion about whether Helleborus viridis is native or just naturalised. There is another plant now, called Helleborus occidentalis  which was once regarded as a form of viridis but now stands as a species in its own right. It grows more to the north and west than viridis and is spread from the UK across France, Spain and Germany. This is thought to be native and is even more rare than the Helleborus viridis.   All a bit complicated and no doubt the ‘experts’ will change their minds again in a few years time. Here is the BSBI distribution map for H.viridis.

Personally I think it is impossible to establish if a species is native or just naturalised for a long time. Also does it matter, they are simply wild flowers and as long as they do not become invasive and out compete other species then good luck to them.

It is poisonous and if eaten will cause vomiting. It was used as a medicinal herb years ago and given to children to rid them of worms!!! Also it was rubbed in their hair to rid them of head lice. I think I would stick with the worms.

Here are some photos of a related species called Helleborus argrutifolius or Holly-leaved hellebore, however the flowers are very similar to Green Hellebore. They were  taken from plants growing in a neighbors garden. You can in fact see the spiky leaves.

She has lived there quite some time and said the plants were there when she came. She also said that they seed quite freely and new plants pop up all the time and I could have some if I wanted them.